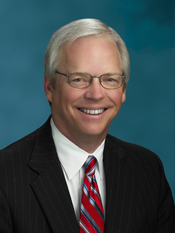 Mr. Crook is Divisional Vice President and Associate General Counsel for Weingarten Realty. His primary responsibility is providing legal services for the New Development Department of the Company.

Bill joined Weingarten Realty as Associate Counsel in July 1998 to form the New Development Division of the Legal Department. Bill was promoted to Vice President/Associate General Counsel in January 2007.

Bill received his Bachelors of Arts degree from Austin College in 1980 and he received his Juris Doctorate degree in 1989 from the University of Houston Law Center. Before law school, Bill worked in the banking industry with one of the largest banks in Texas. Prior to joining Weingarten Realty, Bill was in private practice in Houston representing, among other clients, entrepreneurs in real estate development.

Bill is an AV Preeminent rated lawyer by Martindale-Hubble and is admitted to the State Bar of Texas where he is a Fellow with the State Bar Association. Bill is a member of ICSC and the Houston Bar Association, where he is Life Fellow. He is also very active in Special Olympics, and various civic and alumni organizations including serving on the Board of Trustees of Austin College.